Each year backcountry equipment gets better, stronger, lighter, and, as a result, more and more people are venturing into the backcountry to get some of that untracked powder. The increased popularity of backcountry skiing is good and bad. 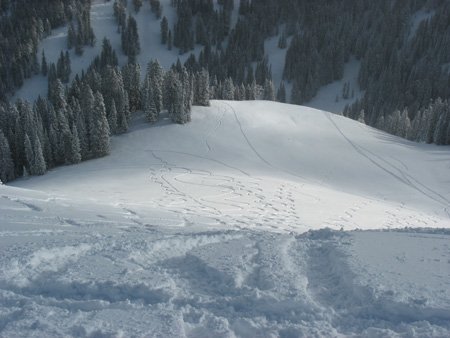 But the downside to more people is that powder stashes get skied up pretty fast, and your favorite secret stash is probably not so secret any more. I’m sure you’ve had the experience of skiing into your favorite powder stash to find a party already there cutting it up. Or, you arrive to find your powder stash looking more like Iwo Jima than a backcountry powder bowl.

When this started happening to me in the early 90s, my first response was like that of a dog: I wanted to piss on some trees to mark my territory, and I’m sure these interlopers could see the hair standing up on my back. Eventually, after enough of these hair-raising encounters, I began to realize that these so-called interlopers were people just like me, and for the most part, they were very friendly people. The more I thought about it, the more I realized that I probably had a LOT in common with these people, certainly more than I did with the average person I meet on the street. Plus, I found that if I made the effort to talk to these skiers, it reduced the friction. In fact, many times I would end up doing runs with them, comparing notes on the area, and sometimes becoming ski partners.

You’re going to encounter other skiers in the backcountry.  Make friends or make enemies. Wag your tail, or piss on a tree. The choice is yours.