One of the purposes of this web site, in addition to posting ski news, equipment reviews, tips, and ski conditions, was to create an online backcountry ski guidebook with route descriptions, pictures of routes and skiing, and detailed maps.

On March 4, I received several threatening, hateful emails from 3 Wolf Creek Pass locals. The reason for the email is that three or 4 locals (supposedly more but only 4 wrote email) are outraged that I had published backcountry ski route information on “their” personal ski area on the North side of Wolf Creek Pass. This article is my response. 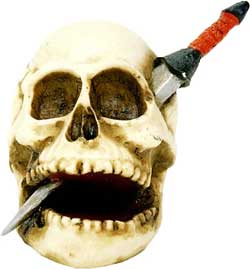 One of the purposes of this web site, in addition to posting ski news, equipment reviews, tips, and ski conditions, was to create an online backcountry ski guidebook with route descriptions, pictures of routes and skiing, and detailed maps. I had pretty extensive coverage of Teton Pass, and sporadic coverage of Colorado areas. Up to this point, the response has been great and this site is getting a lot of hits and ranks quite high in Google searches.

And then, on March 4, I received my first two HATE E-Mails from Howard Cox of Del Norte, Colorado. The reason for his emails, and all the hate emails I have received from the Wolf Creek locals, is that they are outraged that I published backcountry ski route information on “their” personal ski area on the North side of Wolf Creek Pass .

The first E-Mail Howard Cox sent shocked me so much I deleted it immediately, but I can remember enough of it. He called me every foul, hateful name he could think of. He also threatened me; he said that it was not “safe” for me to come down to Wolf Creek Pass anymore. I really didn’t know how to respond to this E-Mail, so, as I said, I deleted it.

Then I received Cox’s second email and I started to get angry. Here is the exact text of Cox’s, email:

Fortino, let me amend and revise my comments.  you can hide behind the lame rationale for guidebooks in general but lets face it: this is about the size and turgidity of your penis.  Why don’t you go out and get laid instead of jacking off to your computer to bolster your delusional ego with your pathetic plea for recognition and self adulation. Go skiing you small, small man.

As you can see from Cox’s E-Mail, there really isn’t much of an argument or plea for me to take down the Wolf Creek Routes in my online guidebook. He pretty much just spews hate and vitriol.

The following is the exact text from an email I received from Deb Morton of Pagosa Springs, subject line, “you’re in deep shit“:

Pat, do you realize how much we despise the advertising you’ve done
w/ your bullshit website?  Your ass is going down in this part of
CO.  Even your old buddy Vince is pissed off at you.  Word of mouth
is okay, but really Pat, what’s the point of putting routes on a
website for the whole fucking country to see?  Do you get paid?

We (Steve & I) would be more understanding if it were a bigger area
here.  But shit, it’s access is quite limited; terrain will be ruined
with lots of people.  I wished I’d known about your “guidebook” when
I ran into 3 of your buddies MLK Monday.  Found out it was Gordon
Banks that skied the crap out of the Plunge after a terrific storm.

You’re a fuckhead, Pat, & we are ALL pissed off at you,

Again, a blatant threat: “Your ass is going down in this part of CO.” I think I can sum up Deb Morton’s argument for taking down my guidebook in one sentence: We don’t want anyone to know about our private ski area…you fuck head.

And here are excerpts from a third E-Mail I received from Steve Hartvigsen of Pagosa Springs. Steve’s letter starts off with an insult: “I find it incongruous that I would need to write the following to a fellow skier that should know better, but I obviously gave you more credit in judgment than you deserved.”

Good point Steve, and a great way to convince me to listen to your argument. I hope I have enough good judgment to analyze your argument.

Steve goes on to say, “You can’t possibly be ignorant of the highly publicized Wolf Creek Village.” I am aware of this development Steve, and have written a letter to protest this development. But a millionaire developing a resort and backcountry skiing guidebook are two different things. And let me ask you this: If you, and Howard Cox, Deb Morton, and the supposed angry others are the only ones who know about Wolf Creek skiing, who will help you protect this area from snowmobilers, ski area expansion, and development?

And here’s another of Steve’s points: “Too bad you never sacrificed your time in attending many of the Wolf Creek Task Force meetings as I, and many of my skiing partners, did.” Because I live 5 hours away from Wolf Creek, and because many of the meetings occurred during the week when I work, it was not practical for me to attend the meetings. Instead, I volunteered to help redesign the website at Backcountry Snowsports Alliance and have maintained it for two years now. For free. I have over 100 hours of free labor in that web site. Is that enough commitment to make me worthy?

My justification for the ski guidebook, other than masturbation, penal turgidity, and ego, was to spread the word, to share this wonderful area with other backcountry skiers. I happen to think that backcountry skiers should join together to share AND protect what they love. If no one knows about Wolf Creek Pass, then who will help you protect it? You were more than happy to use Backcountry Snowsports Alliance to help you fight the snowmobile lobby on Wolf Creek Pass. Did you expect all the skiers from the Denver metro area to write letters on the behalf of Wolf Creek Pass, but never come down to ski it? And if they come down, should they just stumble around in the backcountry looking for the good runs? Shouldn’t we tell them where to go so they too will love it like you do? If they don’t know, if they don’t care, if they don’t love it, they won’t write letters to protect it.

There is no doubt that guidebooks bring more people. In this case, it will bring more skiers. But more skiers will mean that there are more people to help protect this valuable area, and also provide me with turgidity, sex, and an ego boost.

In closing, I think all of you could learn a lot from this expression: You can catch more flies with honey than with vinegar. The letters I received from Howard Cox, Deb Morton, and Steve Hartvigsen attacked me personally and made very clear how much they “hate” me. More importantly, they just made me angry and less than willing to comply with any request they might have. After all, if the locals already hate me, what do I have to gain or lose by doing anything they ask? My first thought was to publish every bit of information I know about Wolf Creek. And I know a LOT.

I completely understand that they are angry about the guidebook. I don’t, however, agree with why they are angry. Wolf Creek Pass is public land. They don’t own it, and it makes NO DIFFERENCE that they happen to live there. Locals don’t own it or have any more right to use it than I do or any other person on this planet.

I found your website a few weeks ago and told [the locals] about it. I too do not understand why anyone would produce such a guide when one skis these great areas. It has already taken a toll on Wolf Creek this winter. There has been mobs of people from all over the place everywhere we ski and we thought the snowmobiles were bad! Anyway I am quite disappointed and ask that you remove the Wolf Creek version from the web.

You will notice that Vince said he was “quite disappointed,” and I can probably assume that he is very angry with me, but he didn’t stoop to the sophomoric tactics of name calling, insults, or threats. I am very sorry if Vince is angry with me because I considered him a friend. But Vince’s argument is the same as theirs: NIMBY (Not in my backyard). They all live in a remote area and like how quiet and isolated it is. But that is a dream. The reality is that there ARE more people and will CONTINUE to be more people and they are coming to all backcountry ski areas. Again, I have nothing to do with that.

I have decided that I probably don’t want to be in the business of writing ski guidebooks. Even though I think your reasons for hating me are pathetic and self centered, I nevertheless don’t want to be the brunt of so much hate. But I will not even consider discussing the existense of this guidebook with Wolf Creek locals until I receive a written apology (posted in the comments section of this article) from Howard Cox, Deb Morton, and Steve Hartvigsen for their personal attacks on me. Until then, the Wolf Creek routes stay.