Last winter, I stumbled into a disaster scene in the backcountry. When I arrived, several skiers were gathered around a skier laying next to the trail. The only info we could get from the downed skier was: his name was Benny, he wasn’t cold, and he couldn’t walk. We were only 10 minutes from the trailhead, but it took 2 long, cold, miserable hours to get him out. Without a sled, we had to carry him.

Last winter, I stumbled into a disaster scene on about a half mile from the trail head in Main Cabin Creek. When I arrived, several skiers were gathered around a skier laying next to the trail. He was wearing ski clothes and plastic telemark boots, but no skis, poles, or pack. He was moaning, groaning, and regurgitating, and he reeked of alcohol. How did this guy get here? Did he actually ski down here from Teton Pass in this drunken condition? If so, where were his skis? His pack? Benny (not his real name), the victim, wasn’t much help. Between moans, groans, and vomiting, about all the info we could get was: His name was Benny, he wasn’t cold, and he couldn’t walk. 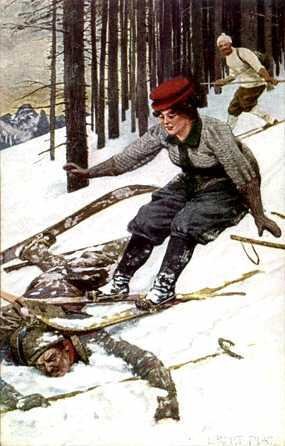 The Life You Save May Be Your Own

Eventually, about 7-10 skiers coming out of Mail Cabin Creek became involved with this rescue. It appeared that Benny had been magically deposited on the trail, completely incapacitated by alcohol. Now that we had “found” him, we couldn’t abandon him. It was about 15 degrees and dropping and would be dark in 2 hours. If we left him here he would probably freeze to death or die from alcohol poisoning.

We were literally 10 minutes or less from the trail head. Ten minutes for someone healthy and on skis. I asked if anyone had the material to make a rescue sled. It was something I had been planning to do for years. Figure out how to build an emergency rescue sled. I figured in a worse case scenario, you could build one with skis and a lot of duct tape. Nobody had the means to build a sled. How were we going to get Benny out of here?

Someone said, “Ok, let’s just pick him up and carry him out.” We took our skis off, strapped them onto our packs, and gave it a try. Have you ever tried to carry a dead body? Benny wasn’t dead yet, but his body was limp and almost impossible to hold on too. After about ten feet, he started squirming and then puking too. We set/dropped him back into the snow. We were all panting after only ten feet. There were four of us carrying him and a couple other skiers as backups. We decided that carrying Benny out was NOT an option.

Two skiers headed out to the road to try to get through to Teton Country Search and Rescue using a cell phone. We figured that once Rescue got here, they’d be able to whisk him out easily with a snowmobile and sled, or just a sled. We definitely needed a sled to haul this guy out. The rest of us stayed with Benny and tried to cover him with our spare clothing. About every 5 minutes, Benny would come alive and throw off all the clothes we put on him, and sometimes vomit again.

I could see the highway about 200 feet above us. No chance of getting Benny up there without a winch. We just needed to keep Benny warm until the rescue team got here. We waited and waited until WE started getting cold. Soon, all of us were sneaking glances are the extra clothing we had given to Benny. Pretty soon we were swinging our arms, stamping our feet, and jumping around to stay warm while trying to keep Benny covered up so he wouldn’t freeze to death. And we would periodically turn him on his side so he wouldn’t aspirate his vomit.

About an hour later, Teton Country Search and Rescue arrived on foot with no sled. We told the guys we sent out with cell phones to tell the rescue team we needed a sled to get him out. NO SLED! I had assumed that a rescue sled was standard equipment on any backcountry rescue. After all, if you called for a rescue, then you probably couldn’t walk.

We carried Benny out to the road that night. What other choice did we have? It was a tortuous process. A group of four would grab each of his four limbs and carry him as far as they could, usually about 25-50 feet. It took at least an hour to carry Benny to the trail head that was ten minutes away on skis. It probably would have taken 20 minutes with a rescue sled with only two to four people. As it turned out, it took 10 of us to get him out.

I learned a valuable lesson that day. I now carry emergency gear that includes an emergency rescue sled ; extra warm clothing; extra food; lighters, matches and fire starter, a SAM splint, and a big space blanket. If I or my ski partners need a rescue, or have to spend a night out, I want to be prepared. If you wait for the rescue team, you will probably have a long, cold wait. Not because they are incompetent, but because they may be on another rescue or they might not be able to find you, or just because it takes a LONG time to mount a rescue.

Be a Boy Scout: Be Prepared.