Work Ethic showed up at my house in Victor, Idaho, around 2pm with a wild look in his eye. “I’m all ready to go,” he said. “Let’s leave today.” We had planned to have a dinner at my house and leave early in the morning to do the big car shuttle: one car at Big Sandy, the trail head, and one car at Trail Lake, the trail end. I was itching to go too so we left around 2:30pm for Dubois, WY and the Trail Lake Trailhead.

It was a bit depressing as we drove past the Tetons. You could barely see the Tetons because of the smoke. It had been smokey in Victor for almost two weeks. I was worried that our Winds trip would be smoke filled. But I had also come to terms with smoke: summers, especially August, will be smokey, but not always. Go in July if you don’t want smoke, but then you’ll have to battle bugs.

We got to Dubois around 4:30. Just enough time to get our permits for the reservation. It costs us $70 each. The fee is $30 per day, or $60 per year if you’re over 60. Since we didn’t know the exact days we would be on the reservation, we bought the yearly. More information on Wind River fishing / recreation permits (they are the same).

Looking at the time, we knew we wouldn’t make it to Big Sandy until well after dark. As a result, we decided to camp near Lander. Turns out there is an RV park right in Lander and you can camp for $20, including a shower. Nothing fancy, but very quiet. Also, we found out later that you can camp for up to 3 nights for free at the Lander City Park, and they have restrooms.

We left Lander around 8am and headed for Big Sandy trailhead. We somehow missed the Lander Cutoff road, but we found it on the way back. It saves a lot of time because it’s a mag-chloride road and you can go 60mph on it.

We got to Big Sandy trailhead around 11am, and the amount of cars made it look more like a rock concert than a backcountry trailhead. But we managed to find a spot and got on the trail around 11:30. It sure felt good to be hiking after all the planning.

We saw lots of people going in and out on the trail. Initially, it irritated me to see so many people, but I realized they were doing exactly what I was doing. Plus, I needn’t have worried; as soon as we got off the trail, it got lonely real quick. 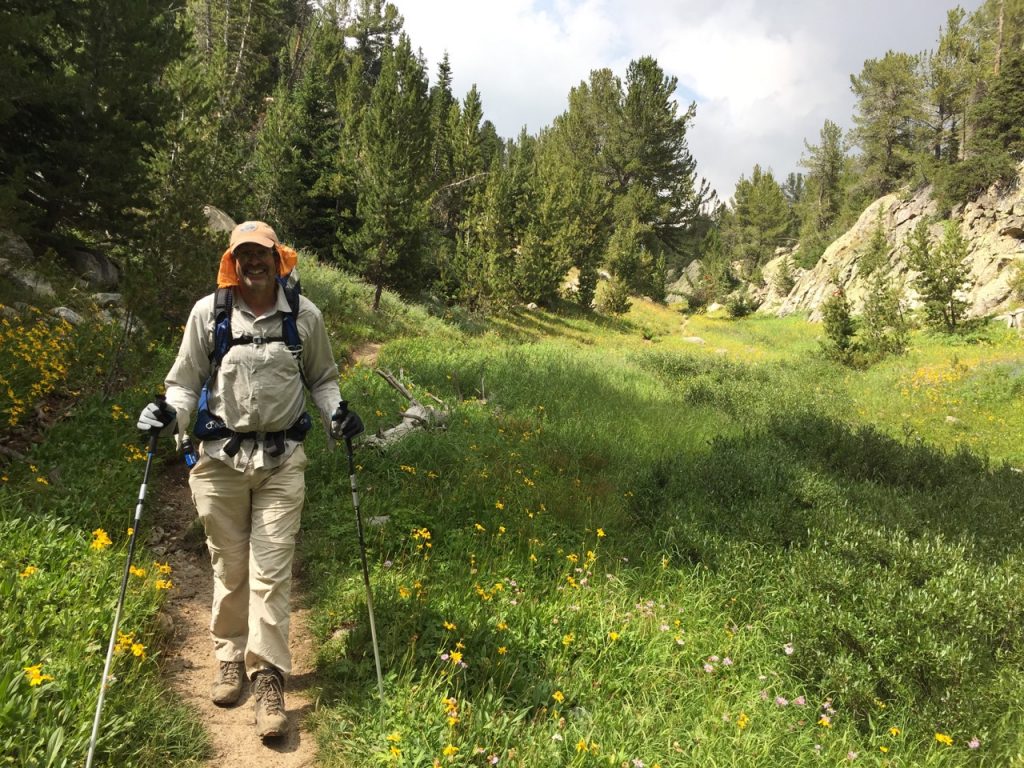 Hiking to Dads, Marms and then Skull lake, instead of going to Big Sandy lake and over Jackass and Texas Pass, was another good decision. It not only saved miles, but it saved over 3000′ of climbing. The hike into Skull Lake, via Dads and Marms, is a beautiful 11 mile hike on a trail, and it was a nice way for us to ease into a very difficult hike. It gave us one day to enjoy ourselves and adjust to hiking with a pack.

We found a nice flat spot to camp near Skull lake. No, there were no heads on pikes at the lake. As we ate dinner and looked over our gear, it was a relief to see that we hadn’t forgot anything.