Wind River High Route Day 3. We had already decided to hike only 6 miles on day three so we would be positioned to do Europe peak and the long off-trail divide section in one day and hike to Upper Gold Lake.

Day 3 started pretty easy, walking along a feint trail on the east side of Lee and Middle Fork Lake. As soon as we started hiking, we were looking for a route up the steep bench to Bewmark Lake. It was covered in thick trees and willows.

Initially, we thought we’d stick to the large talus field near the east side of the bench, but as we got closer, we could see some routes through the willows and trees near the stream from Bewmark lake. The trick would be finding those routes from the bottom, where the route is foreshortened and not visible.

Work Ethic started on a feint trail while I was making some adjustments on my pack. By the time I started, he was nowhere in site. I followed the same feint trail. It went up steeply through some sparse trees and willows. After about 20 minutes, I heard Work Ethic shout. I traversed to the left where I’d heard his voice, but by that time there was about 50 yards of thick willows between us.

Rather than bash through those willows, I decide to continue my route. Although it was very steep, I was able to make short traverses to keep the grade reasonable. My route went all the way to the top of the bench without any bushwhacking.

Work Ethic also found a great route and said it was on a pretty good trail. His route was near the stream that comes down from Bewmark Lake.

We hiked along the west side of the lake. The hiking was easy, mostly soft grass. In fact, the easy hiking continued until we reached the final 500′ to Photo Pass where it was steep scree, but not bad. 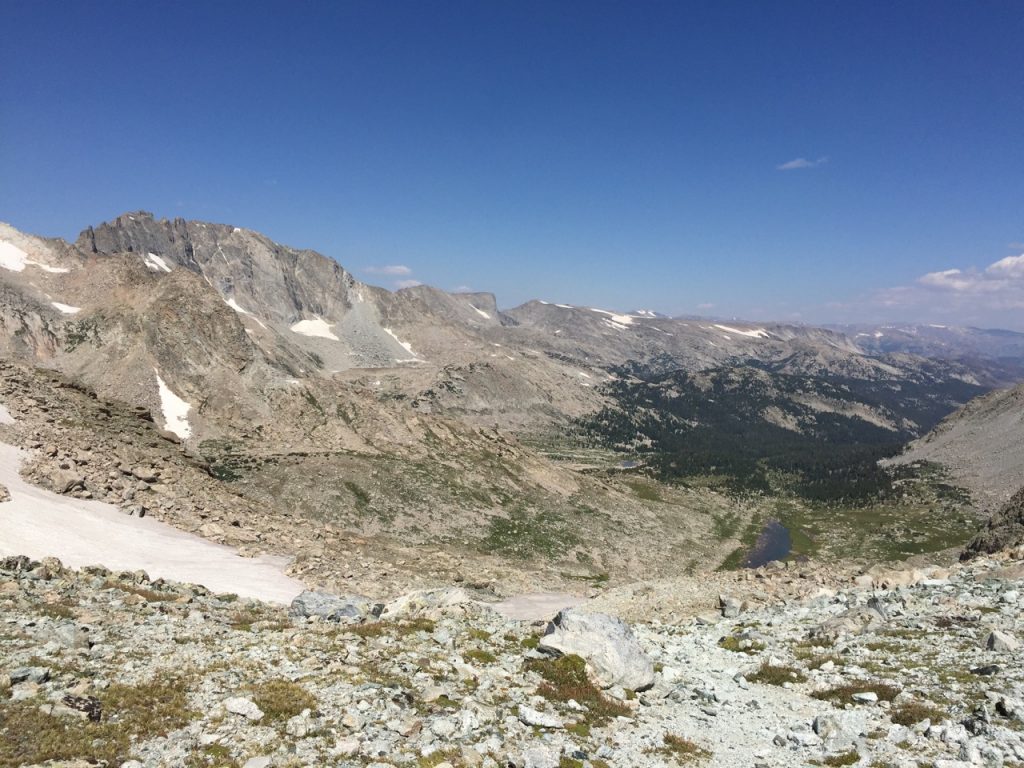 The hike down into Bull Lake Creek Drainage was very steep and loose, but it smoothed out at the small lake at the base of the pass. Now the route felt more remote. Maybe it was because we had crossed into the Indian Reservation. But there was little sign up people: no distinct trails, no campsites, no fire rings.

Even though the USGS map shows a trail, the trail we found was visible only 50% of the time. Work Ethic and I agreed that “a trail isn’t a trail if you need a GPS to follow it. When the so called trail leaves the Bull Lake Creek trail (which isn’t really a trail), then you are either bushwhacking or using a GPS to follow the route/trail up a steep forested slope on the approach to Europe Col.

Once we got above the trees, then the trail appeared again and we were able to follow it to the point where our route again left the trail. We camped at the small lake or pond where the route up to Europe Col leaves the trail. The lake water was somewhat green and questionable, but since we had filters, we used it.

It was a beautiful place to camp. There was a small lake and a thick stand of White Bark pines that offered protection and shade. The temps were still very hot and even the late afternoon sun was very hot.

We talked to a couple of guys from Rapid City, South Dakota. They had done part of the route last year, but were turned back by snowstorms. This year was the complete opposite: 75 degrees and most of the winter’s snows were gone.

They also gave us some good information about Europe Peak. “Keep going up and right of the ridge. You can’t see the way until you’re right there.” We would find out tomorrow what that meant.